Three Changes Affecting the Medical Center You Should Know About

The design phase of the project, completed by Marmon Mok Architecture, began in 2016 with meeting with stakeholders to define the departmental needs and understand special requirements based on the schools’ academic programs to give a new face and provide for optimal functionality to the schools.

The School of Health Professions will also receive a new home as the Departments of Emergency Health Services, Occupational Therapy, Physical Therapy, as well as the Dean’s Office will be newly located on the renovated 2nd and 3rd floors. In tandem with these moves, space will be given to the new Speech Therapy program along with tailored collaborative learning spaces.

The School of Nursing will be receiving significant upgrades to their classrooms and restrooms, as well as the Nancy Smith Hurd Auditorium.

General contractor, Bartlett Cocke, was awarded the contact for construction. There will be four phases of construction with the first phase starting August 9, 2017 and project completion scheduled for December 28, 2019.

Phase 1 – School of Dentistry: A complete renovation for the second floor “R” section

Phase 1 – School of Nursing: Renovation of a majority of the first floor

During Phase 1 construction the following offices will be temporarily relocated to the former space occupied by Texas Star CafA©:

This article is from an announcement made by Facilities Management at UT Health San Antonio. To view the original posting, click here.

As part of making our South Texas Medical Center safer and more user friendly, we have invested $540,000 towards a new project to backlight 15 traffic arms throughout our campus. Not only will these upgrades benefit wayfinding during evening hours, but they will also create a safer environment for pedestrians, cyclists and vehicles. The installations will be scheduled over a period of 24 months, some of which have already been completed. We expect the project to be fully finished by July 2018.

Also, as part of Phase 10 of this project, the intersection at Louis Pasteur / Ewing Halsell will get new illuminated mast arms. For questions, please contact info@southtexasmed.com.

With the added space, UHS would increase the number of patients served and consolidate services for women and children that are now spread out at various buildings. It will do it all without raising taxes, officials said.

The facility will meet the demand of a growing metropolis while it addresses a long-standing problem — attracting and retaining highly trained children’s specialists in a city that has struggled to build a top-flight, freestanding children’s hospital, officials said.

The new tower “will enable us to attract pediatric subspecialists and make sure that we retain these folks, so they don’t leave after they complete their fellowships,” said UHS spokeswoman Leni Kirkman.

Speaking to the Express-News Editorial Board, George B. Hernandez Jr., president and CEO of UHS, said the tower could open in 2022, pending approval of Commissioners Court, which is expected by early August.

“We didn’t really have the funds and the bandwidth to do this (before), but now is the right time,” Hernandez said. “This won’t be a freestanding children’s hospital, but it’s going to be a game-changer.” 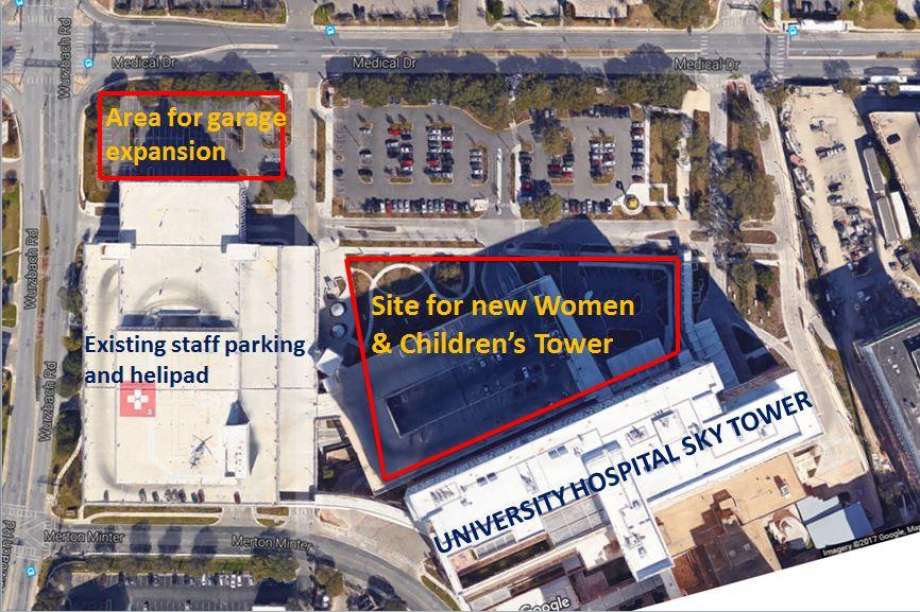 To pay for the new tower, to be built on top of the hospital’s original parking garage, UHS will use $82 million of its cash reserves and $308 million in certificates of obligation, a form of debt that governments use, without voter approval, for certain projects.

The facility will house 250 inpatient rooms for women and children, along with labor and delivery and women’s operating rooms. It will include an existing and expanded Level IV neonatal intensive care unit, as well as a dedicated pediatric emergency department.

The project also includes a new outpatient heart and vascular center, along with advanced endoscopy services, in 43,000 square feet of what had been deliberately unused space in the adjoining Sky Tower, which opened in 2014.

County Judge Nelson Wolff said the growing population of San Antonio, as well as zooming growth in adjacent counties, means the time is ripe for the new tower.

“And we have confidence that the hospital district has the ability to do this job,” he said.

Presently, the hospital’s women’s inpatient facilities are housed in an almost-50-year-old building, with substandard amenities for patients and families, Hernandez said. The present neonatal care is overcrowded; inpatient children’s rooms are housed on the adult floor of the Sky Tower.

“We’ve outgrown the (women’s) building, and this will allow us to serve patients even better,” said Dr. Kristen Plastino, professor of the department of obstetrics and gynecology at UT Health and president of the medical and dental staff at UHS.

The consolidation will open up 72 adult beds currently used for pediatrics in the Sky Tower, Hernandez said. The new tower will dedicate space about equally between women’s and children’s services, although the exact layout is still in the works, he said.

University Hospital serves the county’s indigent and uninsured population, as well as paying patients. It’s a Level I trauma center for adult care and the only Level I pediatric trauma center in South Texas.

Click here to read the full/original article, courtesy of the San Antonio Express-News.